Dell in Germany has, for the first time ever, engaged in a Customer Reference Campaign. Focus Point: Five Video-Case-Studies. First Impressions from the internal ranks – such as Sales – was extremely positive and according to Dell, further clients have already expressed their willingness to contribute with their own references to this campaign. Plans for additional utilisation of the Video-References have also been made. casestudies.biz has analysed this campaign in more detail.
by Harry Weiland (casestudies.biz) translated into English by Iris Paulzen Sweeny (Projectline Ltd.)

Background: Following the takeover of Perot Systems in 2009 Dell aimed to position themselves not only as a hardware provider, but also as a service and solutions provider. The former exclusively computer manufacturer now also speaks about solutions, partnerships and projects.


Strategy: The current Brand Campaign with the headline „The power to do more“, kicked-off at Cebit 2011. The initial material however did not depict genuine clients. In order to emphasise the campaign message, the second phase, starting in October 2011, focused on customer references. With this strategy Dell relied on the experienced marketing service team that had worked with customer references for many years at Perot Systems. Dell themselves maintained a large international Customer Reference Program, which also included the German Market. However, the references for the current brand campaign now highlighted the relationship between Dell, the client and the solution instead of the previous focus on Dell products i.e. hardware. “By clients talking about their genuine experience with Dell, and these experiences remaining at the forefront of the campaign, we have increased our credibility. Nothing is more credible than a happy customer statement. That is the reason why we decided on this reference campaign” says Nicole Krausse, Marketing Manager EMEA Dell Services in a conversation with casestudies.biz. “We place high significance on the fact that the stories are being presented neutral and objectively by the client, as otherwise the message becomes unreliable and is no longer in line with our corporate values.” adds Krausse.


Campaign: Focus point is four customer references: Deutsche Lufthansa, Pixomondo, a visual effects company, IPX, a hosting provider and Marienhospital Stuttgart. Dell has produced a video case study and printed material with each of those clients. A fifth customer reference about the implementation of SAP at Rothenberger is due to be published shortly.

The individual videos can be found here:


Media-Strategy: The videos are the core content of the campaign website: www.dell.de/mehr, are additionally hosted on Youtube and are regularly presented at events such as the Dell Stand at CeBit 2012. At the same time Dell utilises the videos for internal purposes such as acquisition discussions and training of internal staff. Lastly visitors on www.dell.de are greeted by a striking reference story.

Effort & Quality: Nicole Krausse emphasizes that the aim was to achieve an impeccable standard for the reference clips. As a consequence the effort put into the production was particularly high. For this purpose Dell’s advertising agency Young & Rubicam engaged with the Hamburg based specialist for corporate film productions Markenfilm Crossing and a team of seven crew and agency staff filmed for two days. An additional day’s photo shoot delivered the stills for Dell’s print campaign.

Customer selection: Backed by those five customer references Dell want to position themselves as a solution provider and at the same time provide a cross-section of client portfolios reaching from corporate enterprise to medium sized business. To ensure that personalities and camera work in perfect harmony, each potential subject was vetted by Dell and according to Nicole Krausse the willingness to participate in this campaign, even though time was precious and availability limited for the contributors, was extremely high on the client side. Dell also wishes to point out that the reference customers, apart from access to film and photo material, did not receive any kind of compensation for this activity. After publication of the first customer videos Dell had to decline offers from further clients to feature in customer videos.

Authenticity: The statements made by reference customers should be honest and genuine. Nicole Krausse emphasizes that it was entirely up to the customers what they wished to tell the director during the interview. The only guidance given was on the standard opening lines, which are the same in each video and with the opening words of “Ich will…” describing what each individual customer is looking for in a partnership with a solution provider. ”We did not want to dictate any elements and wanted to avoid playacting at all costs. The customers were encouraged to speak freely about their projects and their experience with Dell” states Nicole Krausse, she also adds that selective quotes have been cut deliberately because they sounded too positive.

Supporting roles: Each video features a Dell Key Account Manager alongside the customer.” It was a conscious decision to include Dell personnel in the video in order to highlight the relationship between customer and supplier, explains Krausse. Focus was on staff over brand, because as in real life, business is predominantly about relationships between people“ This is what we wanted to show – how Dell works with the client”. In this case this also means that Dell and the customer are shown to casually chat by the coffee maker, or over a quick take away at lunch. Whether the gastronomic backdrop fits seamlessly into a corporate video remains a question of taste, but in order to give a true picture of the relationship between vendor and client scenes like this certainly add zest. Ideas: The produced evidence material allows for a variety of creative uses. A TV advert summarizing the lead quotes of all five reference customer springs to mind. For now a dubbed version of the Lufthansa clip for the international Dell audience is in the planning stages. This in itself is a novelty, as it means that for the first time in the history of this US corporation a branding idea has its origins on “the other side of the pond” and makes the move from its roots in Germany over to the US. Having said all this, the reference customers did benefit in their own ways from their participation - Pixomondo for example utilises the four minute video clip for their own PR purposes.

Results: Dell Marketing is said to be very satisfied with the results of the campaign. “First reactions were very positive” says Nicole Krausse. The campaign was met with great enthusiasm by Dell staff and clients alike predominantly because this approach was a first for Germany and Dell staff received open and direct praise from their clients in this often very personal depiction. The videos prove to be of especially high value for the sales force “The videos are helpful” says Nicole Krausse “and have a great motivational effect.”

casestudies.biz-verdict: Whilst the first phase of this campaign lacked credibility, the second phase was a definite success. Not only the application of filming proficiency, but also the employment of content is near state of the art. Not putting marketing phrases in their customer’s mouths is a credit to Dell. This kind of progressive thought leadership is still rare amongst corporations, especially when moving into the realms of film production many marketers and advertisers are all too often tempted by Hollywood, ending up with make-believe. The Dell videos in contrast come across as genuine, honest and open. Whilst the significance of the human factor in Dell business is very well portrayed, the necessity of including the key account manager remains questionable. The statements made by all four account managers in the videos are more or less standard and commonplace. In order to demonstrate the “partnership” the statement by the customer alone would probably have sufficed. All credit to the high quality, but whether it has to result in such a high level of production is matter of opinion. The disadvantage when applying this degree of effort is that the budget will only stretch to five case studies, but not for ten. The estimated budget per customer video was around the 20,000 Euro mark. When advertisers film this kind of material the end result is often overly glossy, along the lines of a prime time advert, whilst the optimal video case study aligns more with a journalistic contribution in the ten o’clock news. Certain little snippets as used in the videos makes it look too much like an advert. Regardless: The Dell Campaign proves that the utilisation of customer references in marketing communications 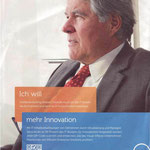 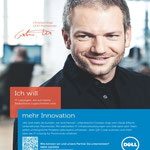 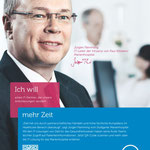 Addition: The presentation of one case (pixomondo) at Cebit 2012: 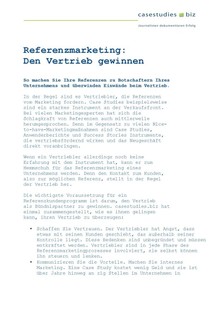